Brainerd.com does NOT support the practice of turtle races. You can read archived information from the Nisswa Turtle Races below, but new information will not be added.

The Nisswa Turtle Races showcase small town America. The Turtle Races, which began in 1963, are a favorite summer tradition for many who live and vacation in the Brainerd Minnesota Lakes Area. In fact, now that the races have been running for over 50 years, it isn’t uncommon to see 3rd generation racers take the track to compete for the title of Grand Champion.

You might be wondering, “Just where do those turtles come from?” Mark Ulm, Nisswa Turtle Race Master, explained in a March 2011 segment of LPTV’s Common Ground, that Turtle Wranglers bring turtles out of the wild after turtles have laid their eggs in the spring, release them back into the wild for the winter following race season.

On race day, the turtle wranglers wet the race track to prepare it for the turtles. Then, when the number on each racer’s souvenir button is called, those racers gather around the inner race circle and select their turtle. When the races begin, they release their turtles and cheer them on, encouraging—even begging—them to hustle to the finish line. Many racers use water from their turtle bucket to splash their turtles in an attempt to coerce them to speedily reach the finish line at the race track’s outer ring. Referees blow their whistle once a turtle has reached the finish line, and the winner can take a bow.

The races can last a couple of hours. There are several rounds of races in order to accommodate all of the racers. It is not uncommon for several hundred racers to participate each week—upwards of 850 racers is not unusual in the height of summer. I was surprised, however, at how quickly each round went. Our race numbers were 69 & 70 and we were up in no time!

After all of the racers’ numbers have been called and they’ve all had a chance to race, the Turtle Race Master will announce additional rounds of racing from the semi-finals and finals to specialty races such as the Resort race, Grandparents race, Locals race, and the Tiny Tots race. These additional rounds continue to have a light-hearted spirit and give racers another chance to get in the ring and help urge their turtle to the finish line.

There are no age limitations on who can race--all ages are welcome. Spectators are also welcome and have about as much fun cheering for the turtles as the racers! The primary goal for all is to have a good time.

“Smiley” the turtle wanders through the crowd on turtle race day. Be sure to say “hi” if you see him; Smiley likes photo ops and high fives! 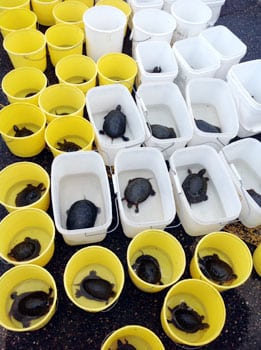 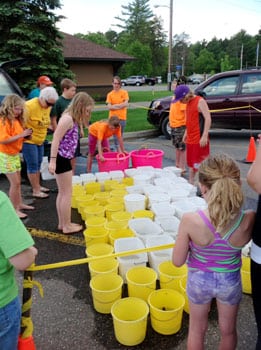 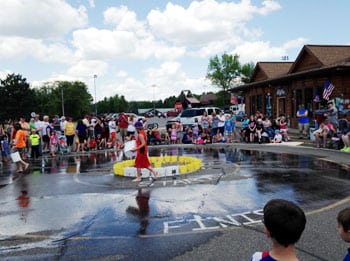