Twenty-five years ago, the Paul Bunyan Trail was a vision that few people had faith would come to realization. After years of hard work—fostering support, paving paths and constructing tunnels and crossings—this October another bridge has been crossed, literally, bringing the completion of a safe, recreational trail one large step further to completion. October 15, 2008, the Paul Bunyan Trail Bridge Dedication, was held to celebrate the newly constructed Excelsior Road Crossing in Baxter, MN. 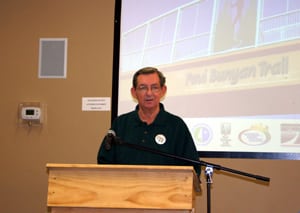 The Northland Arboretum provided a meeting space for all who gathered to celebrate the Excelsior Crossing Bridge Dedication. The dedication program began with a brief, leisurely walk along the trail through an array of bright fall colors to the newly constructed bridge. The bridge was officially crossed for the first time, and the first bridge walk over Excelsior Road was then celebrated with a Historical photograph of the gathering. A commemorative program, which included a slide show of the bridge construction, at the Northland Arboretum followed the bridge crossing. 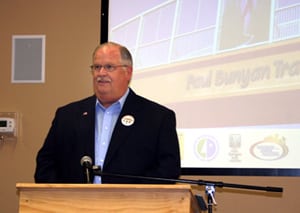 The Excelsior Road intersection of the Paul Bunyan Trail is one of the busiest crossings along the trail; it was also deemed the most dangerous trail crossing on the entire 110 mile trail system. In the 2004 Legislative Request, the safety of trail users passing this crossing was expressed. Traffic is often heavy in both directions with 11,000 cars passing daily, traveling at speeds of 30 – 40 miles per hour. Trail user safety was additionally of concern due to a curve in the road nearby which hampers motorist visibility of the crossing.

The Paul Bunyan Trail Bridge constructed at the Excelsior Road Crossing, provides a link from north to south, ensuring user safety. Oberstar’s support of this project helped secure the Federal funding that was contributed to the bridge construction. The City of Baxter saw the need for a safer crossing as traffic and trail use both continued to increase and took the lead in this project. This project, however, was truly realized by a joint effort of many. Additional contributors who played a critical role throughout this bridge construction project include the Paul Bunyan Trail Association, Minnesota DNR, Minnesota Department of Transportation and the area Chambers of Commerce.

The Paul Bunyan State Trail is one of the most scenic multi-use, recreational trails constructed in the United States. The trail passes by the shores of 21 lakes and over 9 rivers and streams; it winds over rolling landscapes and through state forests. The Paul Bunyan Trail, when completed, will provide paved trail access from Crow Wing State Park north to Lake Bemidji State Park. At Lake Bemidji State Park, the Paul Bunyan Trail intersects with the Blue Ox Trail, forming one of the longest contiguous railroad bed conversion trail systems in the United States at 210 miles.

Congressman Jim Oberstar was the Keynote Speaker. Congressman Oberstar has provided ongoing support for the Paul Bunyan Trail throughout its development.

Recreational use of the Paul Bunyan Trail, which connects about 15 different communities that are situated every 8-10 miles along the trail, varies by season. During the summers, trail activities include biking, walking, and in-line skating. During the winter, the trail offers great snowmobiling access. In addition to its own trail ways, the Paul Bunyan Trail connects with a network of trail routes that collectively provide 2,200 miles of snowmobile trail access.

Visit PaulBunyanTrail.com to learn more about the trail and trail activities.

Other Bridges Funded and Built to Date

In the Brainerd and Baxter Communities:

In October 2003, a Trail Tunnel/Underpass at the intersection of Highways 210 and 371 was built and provides connection to 12 miles of bike trails in the Brainerd and Baxter communities

The Mississippi River Crossing was constructed in 2002 on a four-lane divided highway South of the Baxter city limits. This crossing will help provide future access to the Crow Wing State Park.

Along the rest of the trail:

Future paved sections of the Paul Bunyan Trail will include: 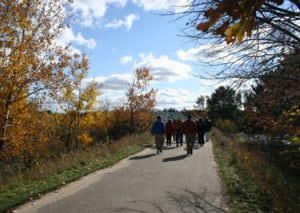 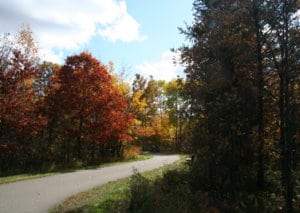 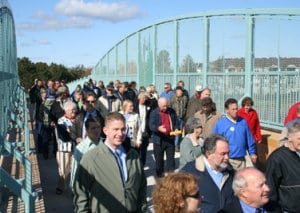 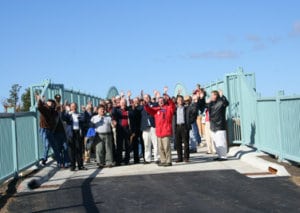 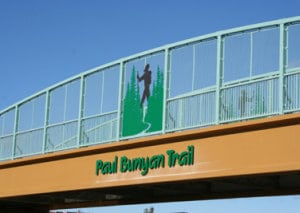 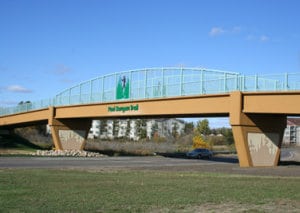 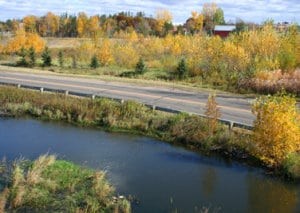 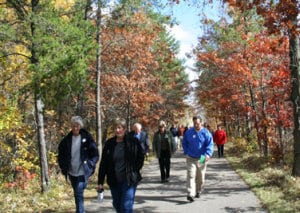