He was playing upstairs in the house when he heard an unusual, loud noise. He recognized the sound as that of an engine. He knew it wasn’t a car; Nor was it a boat . . . however, the noise was coming from the direction of the Mississippi River. He climbed out of the window and up onto the roof, and that is when, at age 9, the now-famed aviator Charles Lindbergh saw his first airplane. 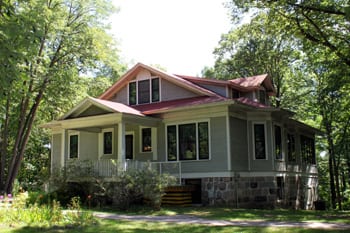 Charles Lindbergh’s boyhood home is open for guided tours at the Charles A. Lindbergh Historic Site in Little Falls, MN.

Charles Lindbergh–often called Lucky Lindy or The Lone Eagle due to his success at completing the first successful solo flight across the Atlantic in his airplane, The Spirit of St. Louis–spent the summers of his boyhood years at the home his father built on the west bank of the Mississippi River in Little Falls, MN. In 1969, this house–the house from which Charles spotted his first airplane–was given to the Minnesota Historical Society and is now, together with the Museum and Interpretive Center, part of the Charles A. Lindbergh Historic Site.

Most of us are familiar with Charles Lindbergh the heroic aviator; however, when visiting The Charles A. Lindbergh Historic Site, we are given the opportunity to see a more intimate picture of

With over 90% of the home furnishings being original, it is easy to step back in time and imagine, with the help of tales sketched out by interpretive guides, Charles as a young child with an ever-shining glimmer of inspiration and curiosity in his eye.

We learn about Charles’ chores and his early interest in science and engineering. We hear anecdotes of Charles’ everyday boyhood life, shared by historic interpreters as they were recounted by Lindbergh himself. We understand how stories of WWI fighting pilots, such as Tam O’ the Scoots by Edgar Wallace, fueled Charles’ desire to become a fighter pilot. We explore the history of the farm that Charles ran as a teenager and realize Charles was not only interested in how things worked, but was also mechanically inclined. 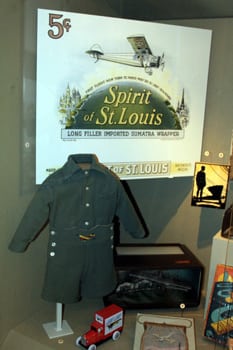 As we discover Charles’ early passion for all things mechanical, we also come to realize that his remarkable, yet often-overshadowed involvement in designing the heart perfusion pump with Alexis Carrel in the 1930s seemed to Lindbergh a natural, logical mechanical solution. “He related a bad heart to a tractor with a bad part,” explained Melissa Peterson, Site Supervisor of the Charles A. Lindbergh Historic Site. “When a part is bad, you take it out and replace it with a new one.”

The museum and interpretive center at the Charles A. Lindbergh Historic Site tells the full story of Lindbergh’s life through photographic displays, artifacts, hand-on exhibits, and a 23-minute documentary that plays in the Museum’s lower-level theater. Visitors can recount the chronicles of Lindbergh’s life: triumphant tales, such as Charles’ heroic flight in the Spirit of St. Louis and his homecoming celebration; life-altering moments, such his marriage to Anne Morrow and the kidnapping and murder of their toddler son; and impassioned movements, such as his unpopular stance prior to the bombing of Pearl Harbor and his commendable involvement in conservation activities.

The museum is open and guided tours of Lindbergh’s childhood home are given each Thursday – Sunday, Memorial Day Weekend through Labor Day Weekend.

Special events held each year at the Lindbergh House include:

Watch for these events on the Brainerd.com Events Calendar.

Group and Educational Tours for groups of 10 or more are available year-round with advance notice. It is recommended that Group Tours are pre-arranged with a minimum notice of 2-weeks and can be arranged as much as a year in advance. Contact the Charles A. Lindbergh Historic Site at 320-616-5421 or email lindbergh@mnhs.org to make arrangements.

More information about the Charles A. Lindbergh Historic Site, including driving directions, admission rates dates of special events and hours of operation, is available on the Minnesota Historical Society website or by emailing lindbergh@mnhs.org.

The Charles A. Lindbergh Historic Site is operated and maintained by the Minnesota Historical Society. 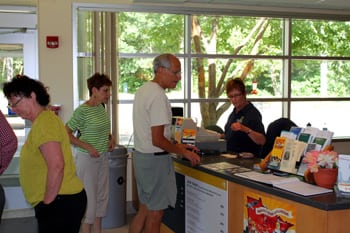 For a small admission, guided tours and access to the two-level museum are available. MHS members receive discounted rates. 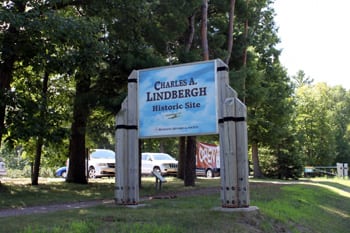 The Charles A. Lindbergh Historic Site welcomes you to stop in on your vacation to the Brainerd Lakes Area. 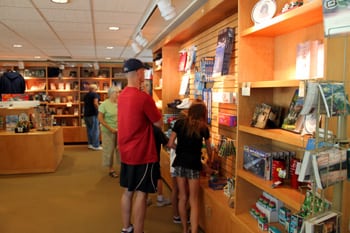 Take home a souvenir–clothing, books and other Lindbergh and aviation memorabilia are available at the gift shop. 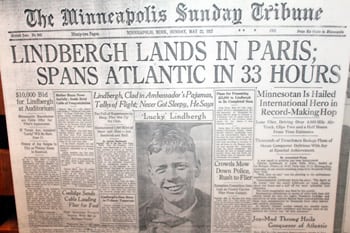 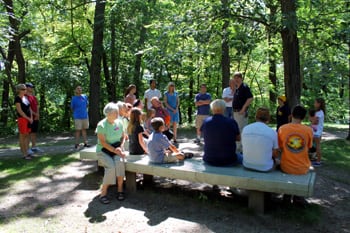 The tour starts outside of the home, as guests are introduced to the property on which the Lindbergh home was built.

Guests are guided through interior and exterior portions of the property as they learn about Lindbergh’s boyhood.

It’s a short walk in on a nicely shaded path from the Interpretive Center to Lindbergh’s boyhood home. 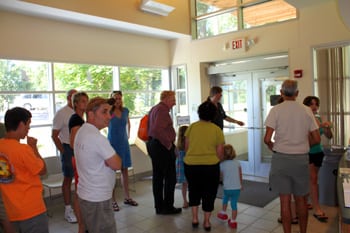 This group is about to leave the Interpretive Center for a guided tour of Lindbergh’s boyhood home. 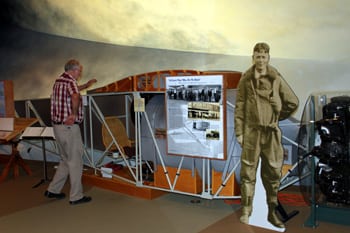 Among the interactive exhibits at the Lindbergh Interpretive Center is the flight simulator which allows guests to sit in the cockpit of this full-scale replica of the Spirit of St. Louis.

Interpretive Guides take visitors through the Lindbergh House while sharing little-known facts about Lindbergh and his family. 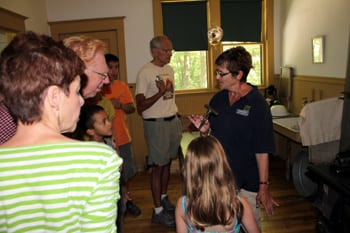 Tour guides tell stories about Lindbergh’s life as a child and use original home furnishings to help recount the details. 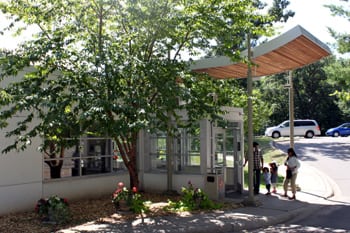 The Lindbergh Interpretive Center was dedicated in 1973 and welcomes thousands of visitors annually.

The Lindbergh House was built by Charles’ father, Charles A. Lindbergh, along the west bank of the Mississippi River.

Charles Lindbergh’s boyhood home is open for guided tours at the Charles A. Lindbergh Historic Site in Little Falls, MN.