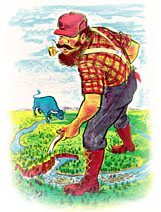 One time Paul's men started the logs down a new river which they had never seen before. They began to notice that they were seeing familiar places over and over again and then finally realized that they were on the Round River which went round and round and had no end.

Paul knew that this was a bad thing so he shoveled out the center of the river and made it into a big lake which is now known as Round Lake.